'We out here': Muslim women who travel 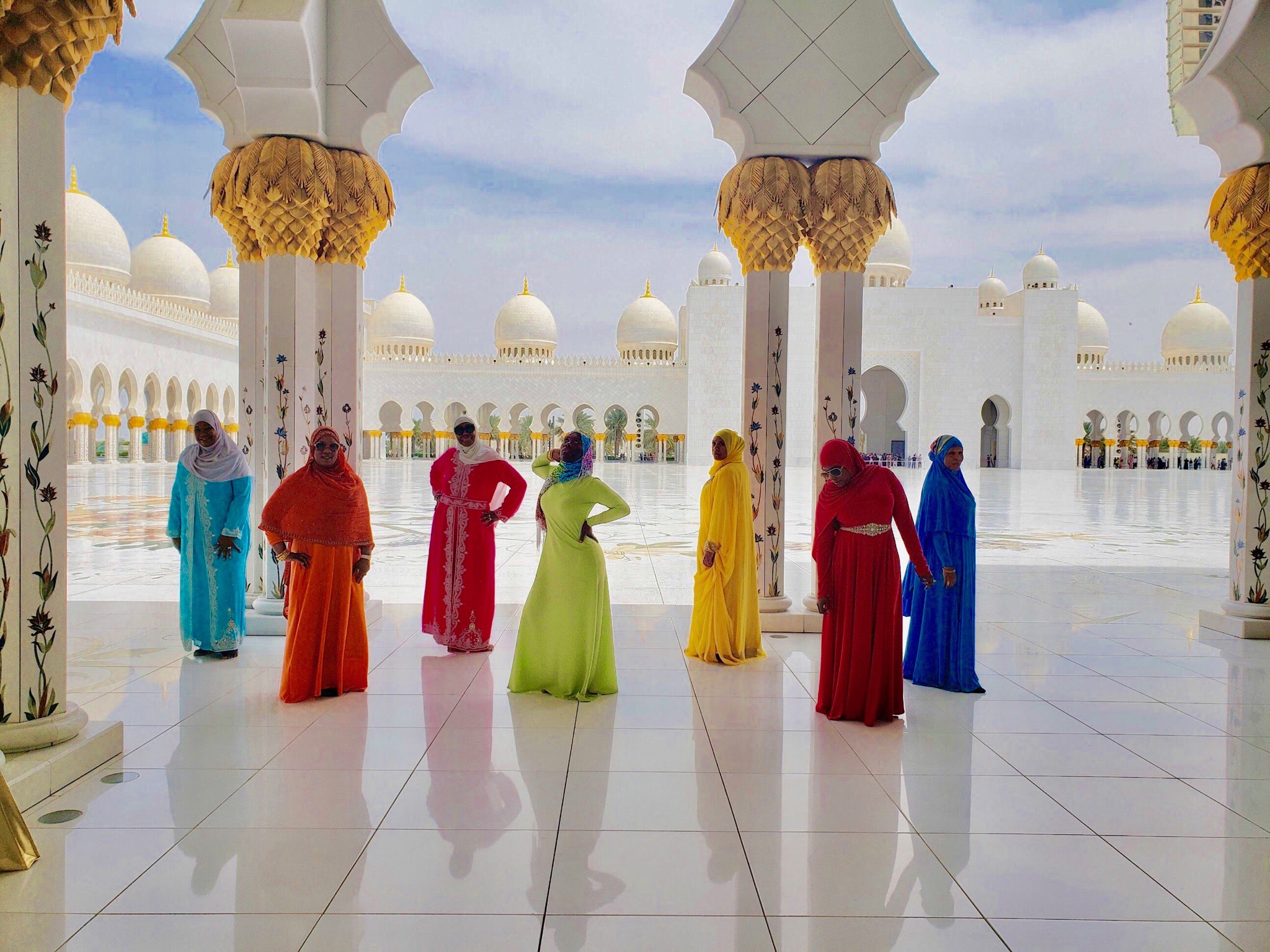 Photo courtesy of Travelling Muslimahs via The Muslim Vibe

The growing popularity of international travel among African Americans often referred to as “the Black Travel movement,” has led to a burgeoning industry of travel groups and social networks that center the experience of Black globetrotters. In so doing, the movement promotes travel stories that combat the age-old stereotype that American-born Black folks rarely travel beyond the Caribbean or the continental United States. Although many travel reflections highlight fun or tracing one’s ancestral roots, the Black Travel Movement also confronts current and historical racial enmity in the United States by creating a lens in which travelers can imagine the possibility of exploration, work or life beyond America. Like many literary artists and jazz musicians of yesteryear, Black folks are finding solace and joy by traveling abroad and exploring other cultures.

Representation matters. Thus, Black-owned travel companies have begun catering to the specific travel needs of Black women. In so doing, they respond to the need for cultural and spiritually centered adventures that honor the full spectrum of Blackness. For example, more women are traveling solo or in groups, normalizing travel blogs and photographs on social media platforms that highlight the global adventures of women. The blogosphere has seen an uptick in articles and personal narratives of Black women actively choosing to inspire others by sharing a glimpse of their lives beyond the Western world. But what about Black Muslim women?

It’s often difficult to find Muslim women among the increasing number of Black travelers who seem to be living their best life. Traveling as a Black Muslim woman whose ethnicity and religion differs from the perceived norm in many societies can offer unique challenges that can include transcending religious beliefs that women should not travel without male companions, physical and verbal discrimination, refusal of service, and even instances of violence. But there is safety and comfort in numbers. With this in mind, Muslim women carry on a tradition of creating space for themselves by establishing travel groups, blogs and social networks that support Muslim women travel enthusiasts in search of cultural and spiritual travel companions.

Traveling Muslimahs, for example, offers global adventures and spiritual journeys tailored for Muslim women. The company was formed by Munazza Muhammad, a Philadelphia native, who set out to challenge the idea that Muslim women were reluctant to travel by documenting and sharing images of a spiritually centered trip. The response to her photos on social media after completing Umrah was overwhelmingly positive and led many admirers to share their own dreams of making Hajj and traveling to other countries. Muhammad notes, “I was familiar with Black travel groups, groups for women, and Muslim travel companies, but few that catered to Muslim women.” Thus, shortly after sharing her own travel reflections, in March 2017 Muhammad created a business plan and began preparing for the group’s first trip — a ski getaway for Muslim women in Vermont. Trips for the all-women’s travel group has since expanded outside of the United States as more Muslimahs have joined.

The Traveling Muslimahs, riding snowmobiles in Vermont. Photo Courtesy of Munazza Muhammad via The Muslim Vibe

Thus far, the Traveling Muslimahs have traveled to Canada, Dubai, Mexico, Morocco, and Spain. The group centers around sisterhood, halal fun, immersion in local culture, in addition to learning about the history of Islam through travel. It also recently completed its first trip to Iceland with over 30 women. One of the group’s core travel goals is to explore the top 20 grand masjids around the world, from the Blue Mosque Selangor in Malaysia to the Imam Mosque of Isfahan–the oldest standing masjid in Iran. In addition, the company allows members to accumulate points with each trip. These points can be used to defray the expense of making Islamic pilgrimages (umrah or hajj) if traveling as part of the group.

Reynisfjara black-sand beach in the South Coast of Iceland. Photo Courtesy of Munazza Muhammad via The Muslim Vibe

Traveling Muslimahs joins other Muslimah-owned and operated companies that encourage travel and self-care/self-reflection for Muslim women. Enliven Your Soul, a self-discovery travel group created by Zarinah El-Amin Naeem, an author and cultural anthropologist, who describes herself as a “transformative travel expert,” aims to assist women with self-discovery, mentorship and the capacity to think globally through travel abroad. Hira Retreats- Mind, Body Retreats for Women, run by Mubarakah Ibrahim, a health and fitness expert, infuses physical and mental wellness into adventures designed to promote learning and self-care among women in addition to trips devoted to Muslim couples interested in crafting a renewed sense of intimacy and communication. Collectively, these companies encourage women to explore, embrace adventure and empower themselves through travel. Media outlets are now catching up by increasing their efforts to feature Muslim women travelers and companies highlighting the intersections between spirituality, wellness and global exploration.

The Traveling Muslimahs was recently featured on the Today show and currently has 100 active travel members, ranging from ages 35 to 65. The group welcomes all Muslim women interested in learning more about the world through travel, though its highest membership and participation is among Black Muslim women.

Despite persistent assumptions that women who wear hijab are oppressed, and travel blogs highlighting the complexities of “traveling while Black” in destinations where Black skin is an anomaly, Black Muslim women are eagerly exploring the world. Muhammad notes, “People treat us like celebrities, they ask to take photos and often tell us how beautiful we are abroad or within the U.S. …anywhere we go, we get positive attention as a group. This may differ when we are alone, but when we are together, the idea of who and what Muslim women are changes.” These welcoming responses to their presence have reaffirmed the group’s belief in human kindness and the importance of learning about the world. As well, their positive reception has revealed to the travelers that the world often differs from how it is portrayed through sensationalized, daily news cycles.

Traveling provides a unique opportunity for self-discovery and a pathway to both spiritual and intellectual growth. The Qur’an reminds us:

“O mankind, indeed We have created you from male and female and made you nations and tribes that you may know one another.”

For Munazza Muhammad, this verse serves as a spiritual reminder for Muslims to bravely explore the world. Her account of her own personal transformation provides a salient reminder of the importance of travel:

“I was born and raised in Philadelphia, it’s home but if I never leave what I know, I would only have a narrow view of the world. Seeing the world provides an education outside of books. Traveling opens up your mind, it’s a way of life, encouraging you to become more accepting of other people and cultures. I believe hate grows when you’re unfamiliar. Travel removes the myths we’ve learned about ourselves and others.”

This article was originally published here and then on The Muslim Vibe.